My name is William, I am 21 years old and currently in my second exchange year in Seoul, the Korean capital. 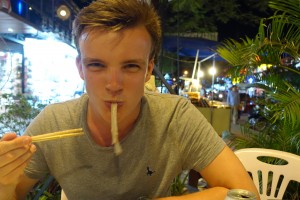 The question which I’m frequently asked is: “But why Korea?”. Well, I tend to answer “But why elsewhere?!”. French people don’t know Korea very well, apart from its iconic songs, smartphones and a certain Kim, who from the North of DMZ threatens now and then to destroy the world. Well you can’t imagine what you’re missing!

Let’s go back to the start… When I was making my UP choices, I thought to myself that I really fancied a new horizon and should leave my comfort zone behind. I was thrilled to have been accepted for Korea because I had done some research beforehand and I got to talk to students that had been there the previous years who all repeated the same thing: that I HAD to go! I realized that I was heading for the other end of the world when the plane left Toulouse: “Oh ***** what are you doing William?!”. 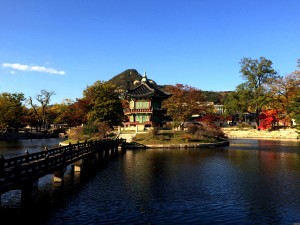 You soon realize that they aren’t living in the same world. Slightly dazzled with stars and happiness during the first few weeks, you feel like you’re in a dream. And then comes the shock, the famous phase which EVERY SINGLE student who has travelled abroad as a first experience, will tell you about: you miss home, people don’t understand you, you don’t understand them, and so forth…

But I’m still alive and since a few months ago, I have been the happiest man alive. With (very) basic Korean, I manage to get around. And I soon realized that Koreans are in fact the most adorable people. You’ll very rarely meet people that welcome you so warmly, who are educated, kind, and most of all, crazy. What they value are friends, family, food and parties. Though they seem shy, they’re only waiting to get to know you and to show you their beautiful culture which they’re very proud of! Nobody eats at home here, because it’s as expensive as eating in a restaurant (3 to 5 euros) and believe me, you can eat really well for very little. And YES, it’s true: Koreans know how to party! We easily got used to the national product, soju, which exists in 10 different flavors from 1 euro per bottle! 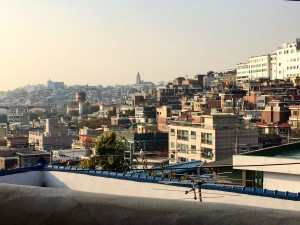 During my stay, I also was lucky to travel around Asia: China, Hong Kong, Vietnam, and many other places… Here, the plane tickets sometimes cost practically nothing and it’s an opportunity to visit all these magnificent countries which will have already changed in a few years’ time.

Oh, yes! I nearly forgot… the course! Well, I was shocked by the size of the university when I arrived. With its 18 000 students, you can’t compare it with our school in Toulouse, though it still is one of the smallest universities in town. This year also gave me the opportunity to follow classes I wouldn’t have been able to follow elsewhere: Korean 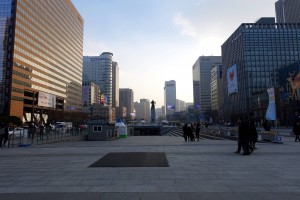 I could write on and on about Seoul and my life here but I advise you rather to come and discover for yourself. I promise you that you’ll love it and you won’t get tired of it… it’s been 8 months since I’m here and I’m not ready to leave yet!

Emilie Pereira
Articles associ&eacutes
My Erasmus year in Budapest
Hello everyone! Nearly 2 years ago, at the end of…
Erasmus : J’ai choisi la Suède
A TBS, on a la chance de pouvoir partir 6…
The new interactive room
Hi! If you are on the Entiore campus, you can’t…